The body’s ability to heal itself depends on a healthy nervous system. Events such as auto accidents, sports injuries, and repetitive stress to the back can hinder the body’s natural ability to adapt. The joints of the spine “lock up” when these events happen, limiting range of motion. Spinal joint restriction and/or misalignment irritates and puts more pressure on the spinal nerve, which can show up as back pain or neck pain.

A Herniated Disc: What is it?

Your spine is one of the most important structures in your body. In fact, early chiropractic practitioners firmly believed that by treating the spine one could treat nearly all of the common ailments that affect the general public, from back injury to flu. This is due to the fact that the spine is in many ways the defining structure within our bodies. It keeps us upright, provides protection to the neural network (also known as the spinal cord) that connects directly to the brain and serves as the basis for our skeletal system. While it’s a complex construction, the spinal column essentially consists of two main parts: 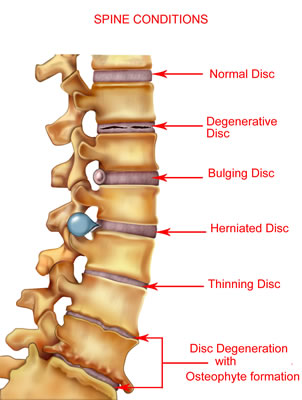 A herniated or slipped disc is a condition of spine in which the disc between the vertebrae of the spinal column moves out of place.

Typically, the disc “slips” out as a result of injury or due to an overly strenuous activity, such as lifting heavy weights. The most common place this occurs is in the lower back (lumbar spine) area; however the neck (cervical spine) discs are also likely to slip, often as a result of whiplash-like injuries. The slipping of the disc serves to limit one’s mobility and often leads to sharp, severe pain in different parts of the body, depending on the location of the herniated disc. Lumbar herniated discs lead to sharp to severe pain in the legs, hips and buttocks. Cervical herniated discs lead to sharp to severe pain in the shoulders and arms. Herniated discs also often lead to numbness in the affected areas or a general feeling of weakness.

Due to the severity of the injury and the vast negative side effects, it’s imperative to properly diagnose and treat the herniated disc fast. Once again, if you demonstrate any of the following symptoms

It is imperative for you to seek a proper diagnosis and treatment. Without it, the condition may worsen over time and lead to the worsening of symptoms and in some cases severe spinal injury.

So, if you think you may have a herniated disc, call us at 972.644.5555 or come by the Injury Clinic of Dallas Office at 905 Custer Road, Richardson, TX, 75080. Our doctor’s and staff would be happy to help with your treatment and recovery as well as answer any further questions you may have about your condition.